Crikey! What’s that up the road? A mob of ‘roos!  Beauty!

Australia is known for it’s interesting animals found no where else on the world. With deadly insects and reptiles to kickboxing kangaroos, it’s not always the best thing to run into the wild animals of the island.  We’ll introduce you to some of the animals we have encountered…

Kangaroo:  Arguably the most famous of the Australian animals, the Kangaroo is the largest of the species in the Macropodidae family. A large male can be up to 2m tall and weigh up to 200 lbs. There are different types of ‘roos,  and they vary in size and location in Australia. These herbivores have large feet and a big tail to help for movement and balance. A normal hopping speed is about 25 km/h, but they can reach up to 70 km/h. Their large feet and tail are also used to fend off predators with powerful kicks.

Wallaby: The wallaby is the smaller version of the Kangaroo. It reaches only 1m tall, but otherwise is very similar to a kangaroo.

Pademelon: Pademelons looks like minature kangaroos, however they belong to a different family.  They are slightly more rodent like, with coarser hair and thinner tails.

Wombat: Wombats look like cuddly little fluff balls, but in reality can be quite fierce. They have short, stalky legs and stubby tails, and lumber around grazing during the evening and into the night. They have rodent like teeth and claws that allow them to burrow deep within the ground during the day to escape the heat. Their rear ends have a tough hide made out of cartilage, which allows them to block intruders and predators from entering into their burrows. If the predators are able to stick their heads in, they use their powerful rumps to crush the skull against the burrow walls.

Tasmanian Devil: Although we didn’t actually see this animal, we think it should be mentioned. Looking nothing like the bugs bunny Tasmanian Devil, they are a black and white, carnivorous creatures roughly the size of a large cat. They are night scavengers, but also hunt the smaller animals described above. These animals are now endangered due to a communicable facial tumour disease and Tasmania is actively trying to keep the healthy population safe by segregating them from the rest of the main island on to peninsulas and smaller islands.

Koala: Koalas are the closest living relative to wombats, with their spoon shaped nose and stubby tails. These sleepy species typically reside in eucalyptus trees, and their leaves make up the majority of their diet. They are pretty sedentary and sleep for up to 20 hours a day. They come more alive at night, and emit large bellows that were described to us as “monster like”. Like kangaroos, koalas have pouches in which they carry their young for the first half a year of life.

Kookaburra: Kookaburras do sit in the old gum tree, merry merry king of the bushes he.  The distinct laugh of the kookaburra sounds like a DJ mixing together a mishmash of acoustic noises with a harsh bird call. Kookaburras are carnivorous, which we didn’t know when two flew up to our place in Sydney and we tried to feed them. It explains why they weren’t very interested in the cereal and nectarine we tried to feed them.

Penguins: Fairy Penguins or Little Penguins, are the smallest of the penguin species and are found on the southern beaches of Australia and New Zealand. The grow to be about 30 cm tall and spend the majority of the day out at sea foraging and fishing. They return back to their nests on land at dusk, using the protection of darkness to return home. We sat on the coast of Bicheno, Tasmania hoping to see the little guys return. With the last light left in the sky two penguins waddled up onto shore. They saw us and stayed put for a very long time, before taking the indirect journey back to the nest where we had spied a penguin chick earlier. When they  returned there was a joyus exchange of chirping of the family being reunited. Not as pleasant are the mozzies (Mosquitos), they are smaller, sneakier and completely painless in their bite. While waiting for the penguins, Alayna got roughly 35 bites which we found later that night. 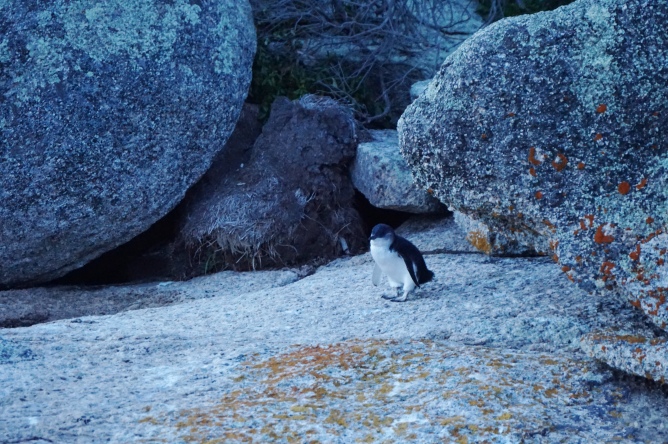 The most dangerous creatures in Australia are actually certain types of jellyfish, as well as sharks, poisonous snakes, spiders, birds and even snails. Luckily we have not encountered any of these, and with only a few more days on the island, I think we’re in the clear! (I hope)

2 thoughts on “Animals of Australia”